CONGRATULATIONS to the Circuit Award winners from the Livingston show!

CONGRATULATIONS TO OUR YEAR END CHAMPS! 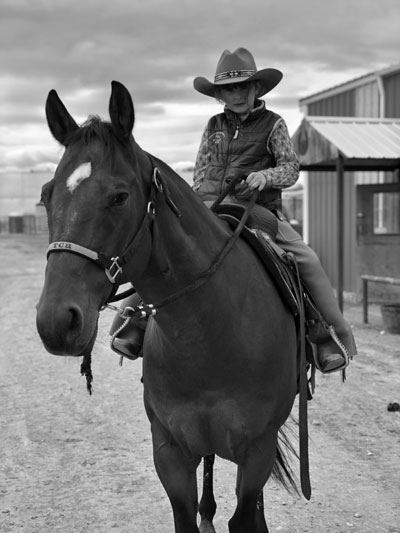 Tell us about your cutting experience:
How long have you been cutting?   1 Year
What initially interested you in the sport?  Because my mom and everyone at the ranch shows cutters.
Which horse gave you your first cutting horse ride?  KP aka Kickit Pepto Style
Have horses always been a part of your life?   Yes
Favorite Cutting Horse Show:   Dillon
Most memorable winning run:  When I won the youth in Dillon.
Tell us about your cutting horse / horses:  He’s really nice and friendly and he’s my favorite horse in the barn.
Nickname: KP
Horse’s Age:  14
Sire:  Peptos Stylish Oak
Dam:  Lenas Lucky Sug
NCHA Earnings:  $13,382.00
Special story or quirk that is unique to your horse:  He always takes a few silly steps when you put wraps on his legs.
Biggest win:  MCHA Youth Rookie of the Year Award.
What does it mean to you to be the 2019 MCHA Class Champion / Special Award Recipient?  It makes me feel special and that all my practice paid off.
2020 Goals in the cutting pen?   To be the Junior Youth Class Champion for the year.
Who or what inspires you?   My horse and the adult cutters I watch at Trout Creek.
Hobbies / Interests outside of the cutting pen?  Ski Racing Giant Slalom and Slalom
Any special thanks?  Robert Keith for allowing me to show his horse and Will Nuttall for all his great coaching and help.

MCHA would like to congratulate our Kim Asay Award Recipient
Mr. Steve James! 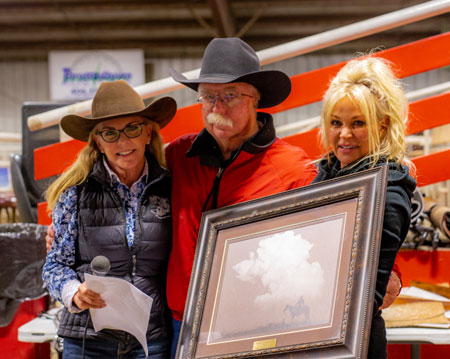 The below letter was written by Mr. Jonathan Foote to honor Steve:

I HEAR YOU LOUD AND CLEAR! You have to go find the oldest cutter in his 85th year to get the full history of Steve Jame's contributions to our unique obsession, "A DISEASE FOR WHICH THERE IS NO KNOWN CURE". (MCGUANE 1980s)

Steve is a TRUE COWBOY. The story could stop there.

He is still tough as an ancient boot.

At times he is the only adult in the room.

At times he is the only pre-adolescent kid.

He is a true horseman who can extract a traumatized Snip Lena from the viewing bleachers into which he had just projected himself.

He is totally comfortable in his own skin. Back in the 80's he rode into the herd in Utah Country, on San Tenino, won both futurity go rounds and Finals, and pissed off Bob Conde to the point where he caught me (the judge) with a touch of ire in his voice and said, "Don't you know you can't let this "Newcomer" win when he rides his unkempt gelding into the herd, sporting a feather in his hat and wearing a pair of chaps that just came from a spring branding and nut cutting!!!

Steve was almost always a gentleman. He always "brimmed" his hat when meeting a woman for the first time and would almost never swear in public.

He was a loyal and true husband as he knew he would be out of action for months to come if he was even suspected of violating his oath of fidelity to his soft spoken, gentle, loving wife, Mavis.

He has always been a great father. Just get to know his kids!!

Steve's contribution to the local cutting community has been constant, committed and consistent for the 40 years we have been friends, even though we haven't always agreed. I always knew where he stood on an issue.
Steve and his family deserve to be recognized, thanked and applauded for their heartfelt loyalty and their almost unlimited contribution to Cutting.

And by the way, Steve, thank you for your endless effort to get me to keep my ass in the saddle when  Gold San Peppy made one of the many front end stops coming into your corner.

Our Regional Director Kristen York and our National Directors Michelle Van Dyke and Kathy Foote have returned from the NCHA convention.  Our Regional director Kristin York has written a brief summary of her thoughts on the convention.  If you would like to read it please click here.  One of the topics we would like membership feedback from is the proposed Regional Circuit Competition that Scott Raftery has worked so hard on.  Please click here to read the proposal, and if you would like to share your thoughts you can email Michelle @ michelle.vandyke@bhhsmt.com or Kathy Foote @ kathy@tsquareranch.com or you may send an email to info@montanacha.com. 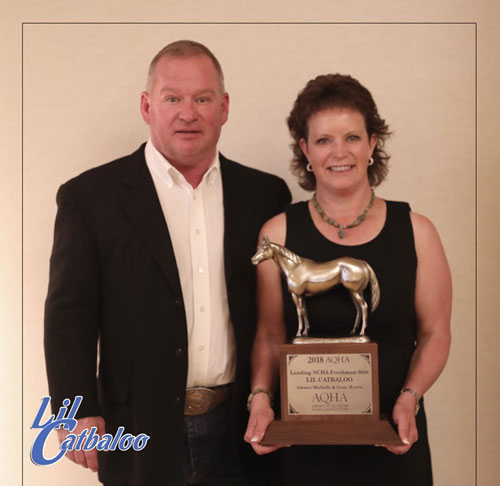 MCHA would like to congratulate Gene & Michelle Morris and Lil Catbaloo
for receiving the 2018 NCHA Freshman Sire of the Year award! 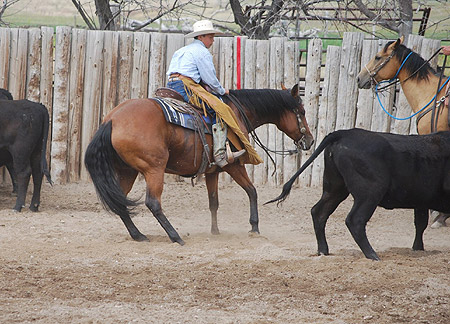 Tell us about your cutting experience:
How long have you been cutting? 4 years

What initially interested you in the sport? When my dad, Todd Banner, started teaching me.

Have horses always been a part of your life? No, but since I was nine they have been apart of my life

Favorite Cutting Horse Show: In Kalispell at the Big Sky Aged Event
Most memorable winning run: 2018 in the NWB class when I won with a 72 on HR Smarty Cat

Tell us about your cutting horse / horses:
Nickname: Tommy, Smarty, and Skipper

Special story or quirk that is unique to your horse: Tommy was the first cutting horse I had ever ridden

Biggest win: On HR Smarty Cat when I got first in the NWB class with a 72

What does it mean to you to be the 2018 MCHA Class Champion / Special Award Recipient? It means a lot to me to be the Youth Rookie of the year, because of all the people that have helped me along

2019 Goals in the cutting pen?
Who or what inspires you? My family and everyone that helps em along to become the best cutter that I can be

Favorite Quote: The Lord is my rock, my fortress, and my deliverer; my God is my rock, in whom I take refuge, my shield and the horn of my salvation, my stronghold.
Psalm 18:2

Hobbies / Interests outside of the cutting pen?
I like to hunt, work with my two year old colt (Gunsmoke Gertie,or Gertie), rope, Ranch work, Football, 4-H, and construction.

Anything else you would like to add:
A special thanks to my dad and mom (Todd and Kate Banner) and to everyone else that has helped me along 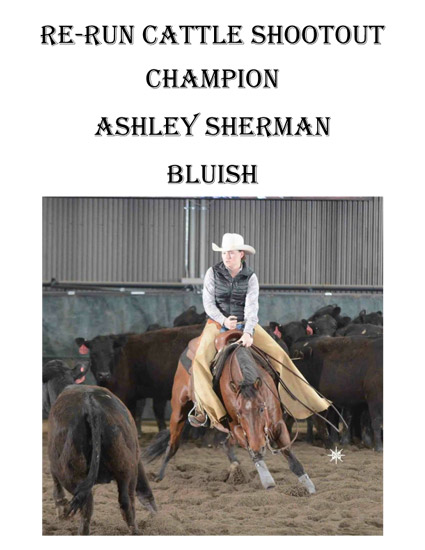 Congratulations to all the 2018 MCHA Class Champions! 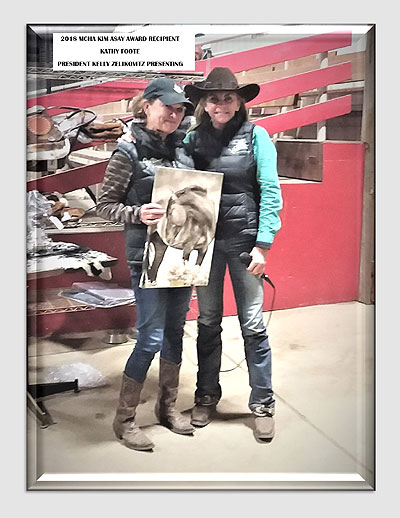 CONGRATULATIONS TO KATHY FOOTE
RECIPIENT OF THE 2018 KIM ASAY AWARD 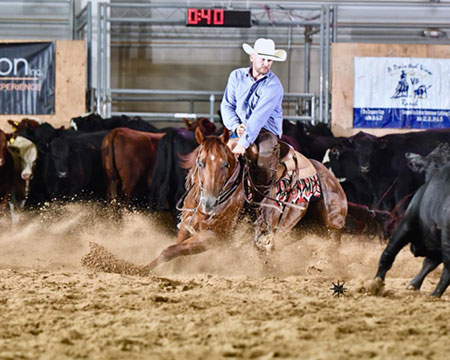 Tell us about your cutting experience:

How long have you been cutting? This is my second year of cutting. I started showing last cutting season of 2017 in the UCHA shows.

What initially interested you in the sport? Well, I think the same with the rest of us… The horses! Horses are amazing animals and true athletes.

Which horse gave you your first cutting horse ride? I purchased a cutting horse in the summer of 2016 from Tim Denton when I went for a week vacation in Weathford, Tx. I got my first ride when I brought her back to Utah and started practicing as much as I could at the Denton farm with the Denton boys (Luke & Kip).

Have horses always been a part of your life? No, I was raised in a construction family, so big machines were mostly part of my life. I got my first horse from my brother who was going to take him to the "meat wagon" because he was too old. I felt he had some more life in him so I took him and road him for few more years.

Favorite Cutting Horse Show: Oh, gosh….This whole 2018 cutting season has been my favorite. It’s hard to pin point just one. We have had a blast at each one this year.

Most memorable winning run: I would have to go with my 74 in Livingston. It’s pretty sweet when the judge announces a new personal high score for the first time. That one felt pretty good! Still waiting for that 75.

Who bred and raised your horse: Breeder was Art & Sandy Haskins Foaled in California. We purchased him from Ben Royal who had him for the last few years in training.

Special story or quirk that is unique to your horse: Rocky is just a real calm cool, dude. Not much bothers him, which generates back into the rider. I guess a good story would be when we purchased him. I had to buy him sight unseen. Luke Denton, my trainer, had told me "You better not! GO out and ride him first.” When I talked to him about getting him. Well, we were actually second in line to buy. I thought we wouldn’t end up with him anyway. Well long story short, we got a phone call a day before Kelsie’s Birthday saying, “He's yours if you want him. We need a Yes or No. If not will move to the next.” Of course I said “YES!! We want him.” We got the deal done and I told Luke he was coming home to Utah. After a few rides we saw his true talent. Luke told us “You got lucky!! Don't do it again!!” We ended up with a great horse and couldn’t be happier.

Biggest win: All wins are big wins in my book.

What does it mean to you to be the 2018 MCHA Class Champion / Special Award Recipient? Actually, it means a lot. It's the first award I have received in cutting, so it will always hold special memory for me. Thanks again MCHA!

Who or what inspires you? I really just inspire to be a better man each and every new day.

Favorite Quote: Anyone who knows me, knows it’s got to be a Lonesome Dove Quote… "If you want any one thing too badly, it’s likely to turn out to be a disappointment. The only healthy way to live life is to learn to like all the little everyday things – like a sip of good whiskey in the evening, a soft bed, a glass of buttermilk, or a feisty gentleman like myself.” -Gus

Hobbies / Interests outside of the cutting pen?
Cutting and riding horses has pretty much been my hobby and interest for the past several years. Is there much time for anything else? lol

Anything else you would like to add: Any special thanks?
Huge thanks again to MCHA board for the award. It really means a lot! The Denton Boy's, Luke and Kip for letting me tag around them at the barn, asking rookie questions and mistakes until they took me serious enough to give me lessons and show. Last but not least…My ride or die and all-around best loper, Kelsie joe Savage. Thanks for all the support. Love ya babe.